When a new donkey comes to the sanctuary it takes time for them to find a pace they fit it with. Snowball has found his place with Sally, Oliver, Riley and Robbie. They share a paddock and field with 2 mules; Wilson and Austin, Hinny Gordon and 2 miniature horses; Canterbury Blue and Blitz. On visitor days (Thursdays and Sundays from1-4pm) we get the donkeys close to the fence where the visitors can interact with them. Last Sunday hay was put close to the fence near the house to get all the donkeys into the paddock. All the donkeys, except for Snowball, and Wilson and Gordon came into the paddock and the gate to the field was closed. I walked over to Snowball eating at the round hay bale in the field to tell him his buddies had left. He ignored me. A short time later Canterbury and Blitz came to the closed gate to be let in to the paddock and Austin was close behind. I closed the gate and walked over to tell Snowball, still eating, he was now truly alone. He ignored me. A few minutes later a donkey braying from another paddock got Snowball’s attention and he realized he was truly alone out in the big field. He began to bray while he hurried over to the fence. Sally walked over to comfort him and they touched noses. I opened the gate and Snowball came into the paddock to join his pace. Loyalty and being with other donkeys are very important in a donkey’s life. Here is Snowball resting in the shade. 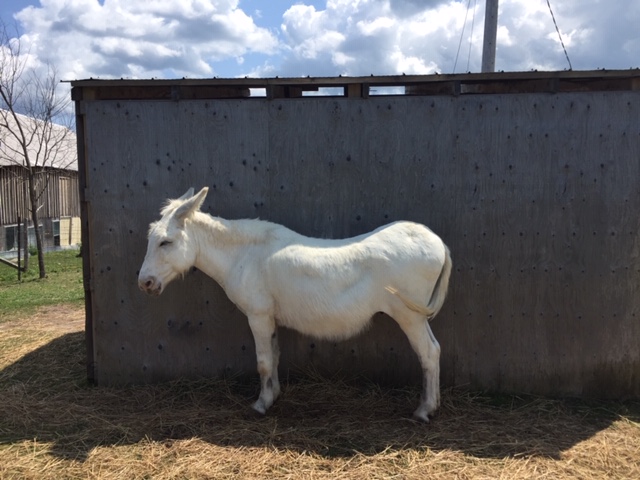