When giving tours many visitors ask what it means when a donkey brays. As we get closer to 4pm at the sanctuary the braying becomes more frequent as Sheila should be in the barn kitchen with the kettle boiling preparing evening feed so those brays mean “don’t forget to feed me I am hungry”. But there other occasions the donkeys bray such as when the water buckets are low or if the hay is low in their paddock or perhapsif the hay is inferior quality as in “I can’t eat this!” When the tractor is running and certain paddocks are getting fresh hay the donkeys often bray to remind the driver to bring hay to them. Donkeys will bray to say hello to their humans and to other donkeys. At the sanctuary some donkeys are at the other end of farm for the winter months and when the upper fields open in the spring there is often braying from one end of the farm and answered from the other end sort of “I am still here”and the answer “yes so I am I”. Not all donkeys bray with same frequency it definitely depends on their personalities: the extroverts are loudest! It is interesting to watch a donkey get ready to bray it takes a great inhale of air as the donkeys heehaw on the inhale and exhale. Here is Jack, with his best friend Sara mini, getting ready to bray: his nostrils are flared for the big inhale! He was likely telling me that there had been no treats handed out in quite awhile. He got an answer from the other end of the farm confirming it was the same there! 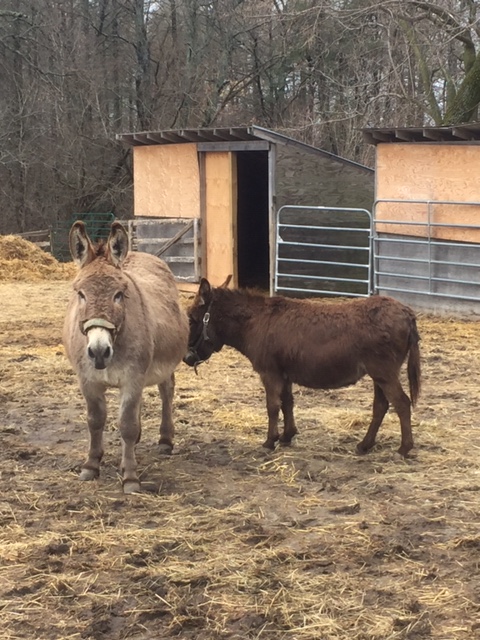