Donkey are extremely loyal animals, as well as being affectionate and intelligent! While they love their humans donkeys need at least one animal to befriend preferably another donkey or equine such as a mule, hinny or horse. Donkeys have been known to develop relationships with pigs (remember Jed and Penelopig, when Jed was rescued he refused to leave the shed until the hiding pig was rescued too!), but most of the rescued donkeys at the sanctuary have come with another equine. Donkeys will protect their companions from predators and other threats. Instead of running away in fear donkeys will kick, bray and bite a predator even going so far as to stomp on them. It is important when a donkey loses their companion that they are allowed to smell the body after that animal passes away, allowing closure. This can’t be stressed enough as donkeys can die of heartbreak after losing their companion if they don’t know what happens to them. In the photo below standing in pairs at Sara mini and Jack and Grace and Sandy. The big mammoth is Aggie who looks like she is supervising! 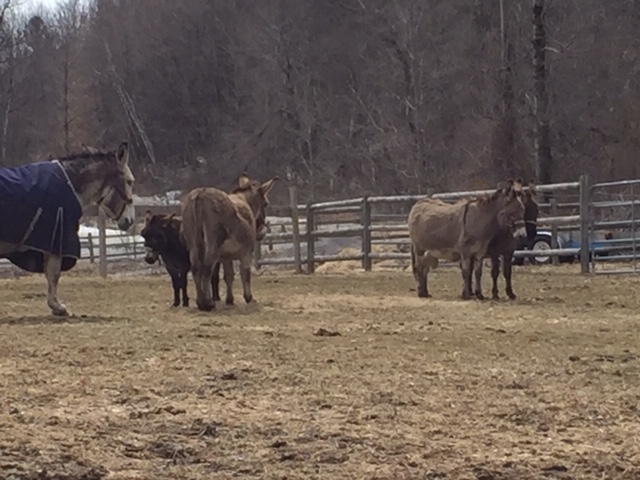