Virgil was a mule (donkey for father, horse for a mother). It is possible the mother was a Shetland pony as Virgil had white socks. Virgil has passed away but there are many memories about him as he had quite a personality. Six years ago Virgil was with the other mules and hinny: Austin, Wilson and Gordon. They were not always kind to Virgil so he was moved in with the other donkeys and mules. Virgil could clear the hay bale with a look so he was first in line but slowly he began to share. He would often do mutual grooming with Finegan and others. Virgil was abused before he came to the sanctuary and he was very cautious with people. If it was dinner time though caution was thrown to the wind as far as coming close to people. Virgil quickly learned that Finegan would eat as quickly as possible so he could finish Virgil’s dinner. Then Virgil would allow us close to him to hold his bowl away from Finegan. One Sunday a muskrat appeared at the sanctuary Virgil was sure the muskrat was a threat and chased him away. On tours we always spoke about Virgil and he would stand just out of reach so he could not be pet. The donkeys are much more accommodating to petting then the mules are.

Virgil was such a handsome boy and had the most soulful eyes and we miss him terribly at the sanctuary. 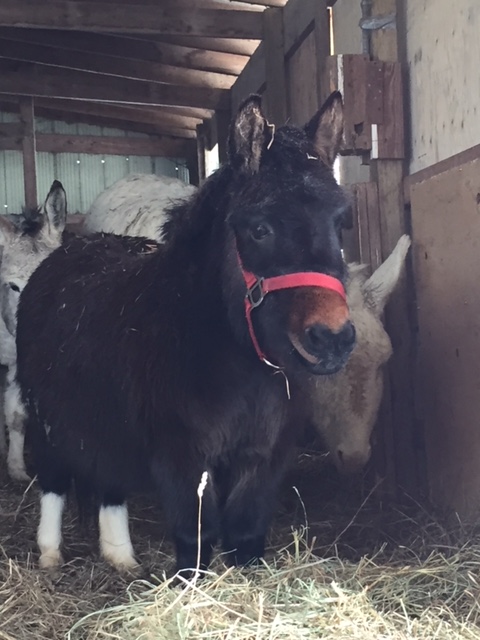