This is Aggie mammoth donkey and Finigan small standard (or large miniature) donkey, her “adopted” son. Aggie, Saffron, Braylee and Finigan who are a pace (group of donkeys) were at the sanctuary a few years ago until going to a foster farm, have now returned. Aggie is a friendly, curious gentle donkey who loves being groomed and pet and also loves Finigan. She treats Finigan like her son: they are often close to each other and Finigan easily walks under Aggie’s head. However biologically they are not related. The description of a donkey based on size is miniature donkey being less then 91 centimetres at the withers, standard 92-122 centimetres at the withers and mammoth over 122 centimetres. Someday I’ll bring a tape measure and determine if Finigan is actually a large miniature or small standard. Both Finigan and Aggie love to come to the fence (as do other donkeys) to greet visitors on Thursdays and Sundays from 1-4pm. 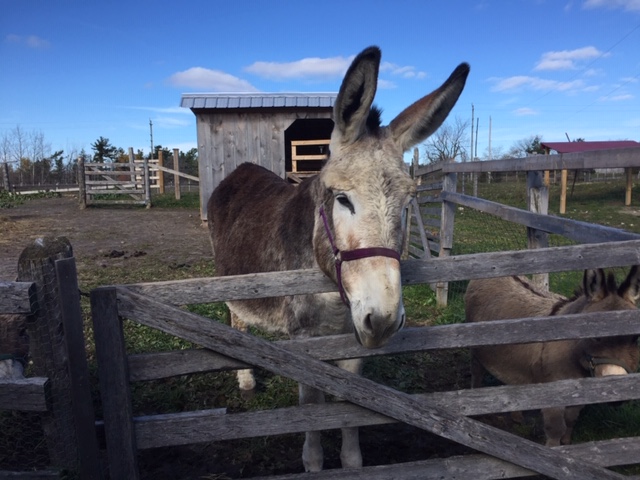