Donkey Tails blog is a well written, informative and very interesting blog by volunteer Vivian about PrimRose Donkey Sanctuary and their animals at the wonderful donkey sanctuary in the Roseneath Ontario area.

Carlos is a hinny (donkey mom, horse dad) who has been at the sanctuary for a few years. His previous situation must have been very frightening for him as he remains very cautious around humans today. It’s best not to look Carlos in the eyes and he has a very large personal space that nobody should enter or he walks away. If the person is carrying a halteror lead line that is the absolute worst thing and he runs away, very frightened and worried. Carlos has had various friends over the years and often chose large mules as his protectors. Jessie mule was a favourite friend but she has gone over the rainbow bridge and Carlos has found new friends. It is very important when equines bond to let the surviving partner smell the body once the animal passes away as this gives them closure. Otherwise they can die of a broken heart. Carlos has made a new friend : Blitz miniature horse. As I was grooming Blitz, Carlos figures keeping Star and Moon between us was the best, while still keeping a close eye on me!! Star is in front, Moon behind and Carlos watches me in this photo. 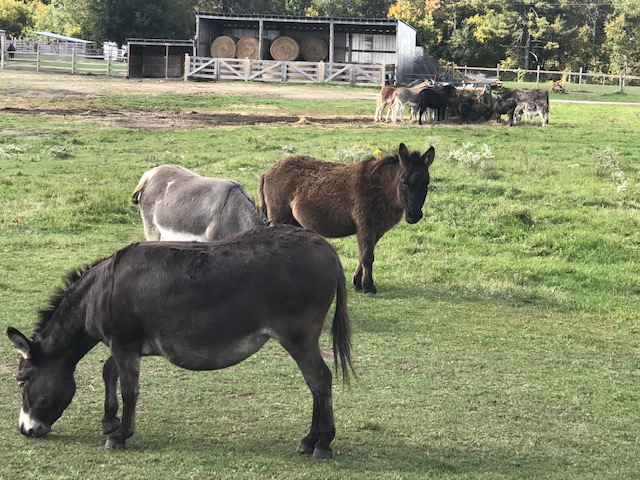 Sara, miniature donkey and Jack, large standard donkey are best friends. They came to the sanctuary together when their owners had to sell the

farm. Sara is a quiet Jennie but knows how to push in front of Jack if she wants grooming or a good scratch. Jack was a bit pushy when he came to the sanctuary but has settled down and waits his turn for hay and grooming although he does line up to remind you not to forget him. Sara and Jack are always together and show how donkeys need another donkey as a companion and how very loyal they are. Separating a bonded pair is very negative for both animals and they can literally die of a broken heart. Here is Sara posing for a photo and Jack giving his cutest, I amstarving, don’t me forget me if you have a treat face!

Jack giving his cutest, I am starving, don’t me forget me if you have a treat face!

This is Lily a standard donkey and daughter of Sara Rose who has gone over the rainbow bridge. A standard donkey is usually 92-123 cm in height in between a miniature and mammoth donkey. Standard donkeys have been used as beasts of burden and pulling carts. As Lily gets older she’s starting to look more and more like her mother. She has a broad back and is dark brown. Lily has a wonderful personality: she is friendly and loves being groomed. She follows along when she wants something usually an ear scratch until she gets one. Lily has in interesting habit when getting groomed: she preens her neck away from the brush and looks over her shoulder. Today she was hanging out with the miniature donkeys: Amelia Bedelia and Rosie. When they went down to the hay bale to join Charlie, Lily went along! In both photos Lily must be listening to something behind her! 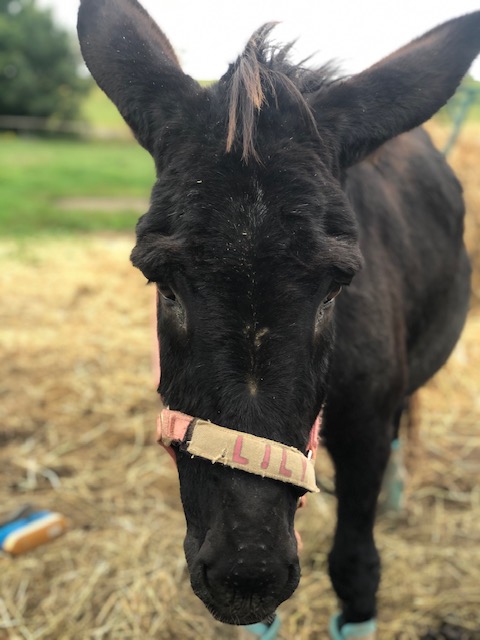 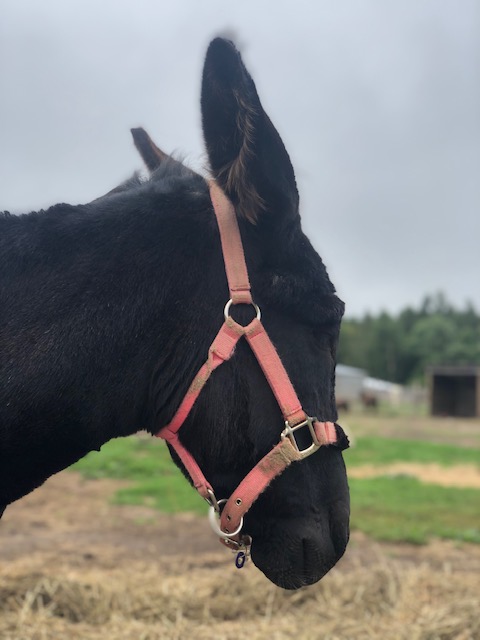 Aggie is a mammoth donkey who lives at the sanctuary with her best friend Finegan. To be classified as mammoth a jennet(female donkey) must

be at least 13.2 hands high(137 cm). Mammoth donkeys were bred to be tall and strong to do agricultural work in the past. They were bred by mating several large European breeds such as Poitou and the Catalan donkeys. More recently mammoths have been used to drag selectively logged trees from forests. As both these tasks are not done using animals these days mammoth donkeys are becoming rare. Aggie is a gentle giant. She loves being groomed and while waiting for breakfast she follows along to make sure she is not forgotten. She has a very loud bray to make sure her call for breakfast is heard! Another way she makes sure she is not forgotten is to stand right in front of you, forget personal space and social distancing! Aggie has one of sweetest gentlest personalities at the sanctuary!

Olivia a new foal at the sanctuary is well cared for and loved by her mother Maggie. Female donkeys, called jennets or jennies, carry a foal for 12 months. Foals nurse for 4-6 months and then are naturally weaned by the mother. At 2-4 weeks foals already start sampling hay, grass and straw. It is fascinating to watch Olivia and Maggie. If Maggie is eating and Olivia tries to nurse, often she will raise her leg as if saying “wait”. When she has finished eating she lets Olivia nurse. As Maggie wanders around the paddock nibbling on grass and hay. Olivia follows along doing the same. While Maggie is eating hay Olivia bounces around the paddock. She plays, dances, trots, bucks, kicking up her heels! Olivia is a joy to watch. Here is Maggie giving Olivia a nuzzle! 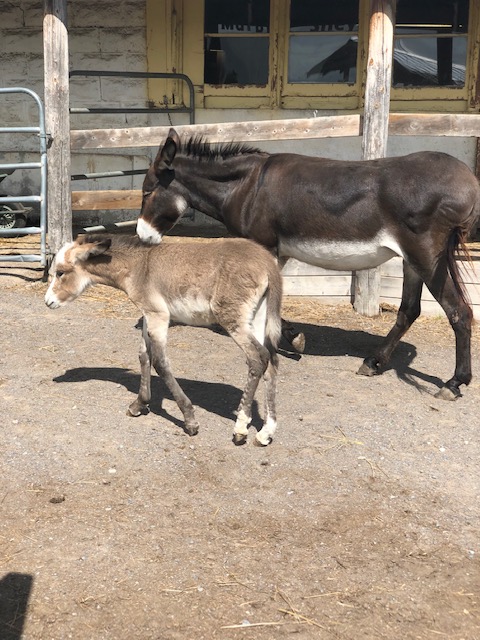 Blitz is a miniature horse who lives at the sanctuary with his best friend Canterbury Blue. Blitz is very quiet and calm, nothing much bothers him, he is happy eating hay and grazing and hanging out with Canterbury Blue. He has the biggest mane and forelock and has a lot of bad hair days! 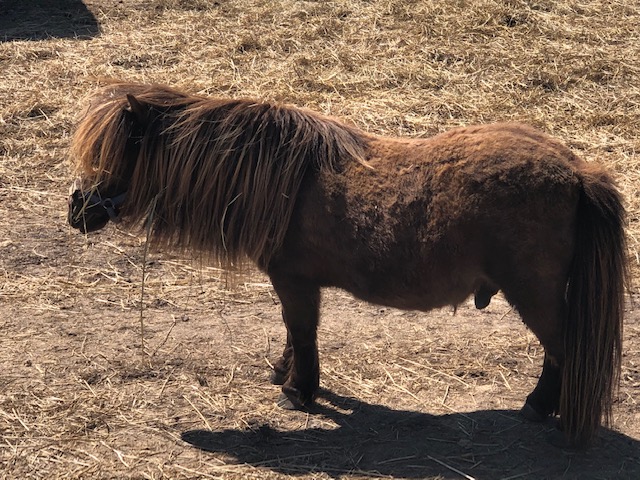 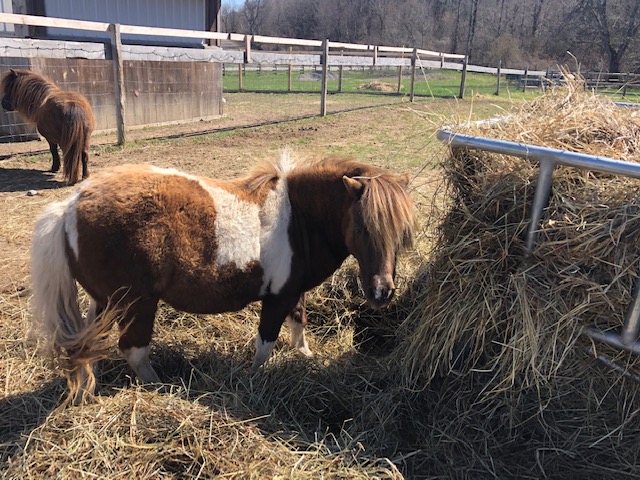 This is Canterbury Blue and being a mare she is a bit of a diva. She can clear the donkeys and mules from the hay bale with a look. Sometimes just for fun she will nip Blitz and he will take it all in stride. What a gentleman! 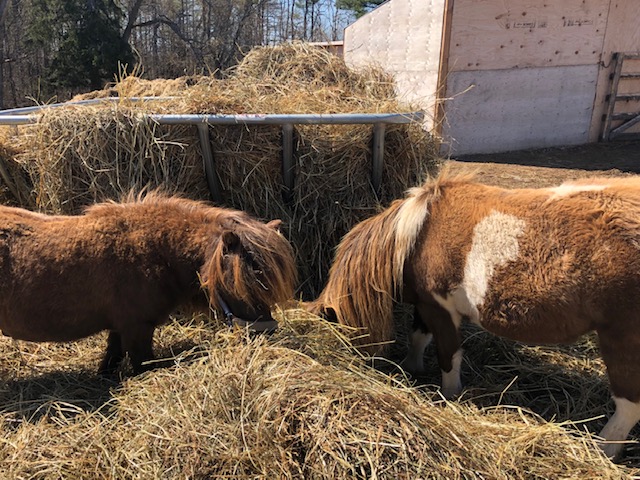 Here they are hanging out at the hay bale on a warm sunny day!